Delomar reveals he was ‘worried’ to go on first solo tour 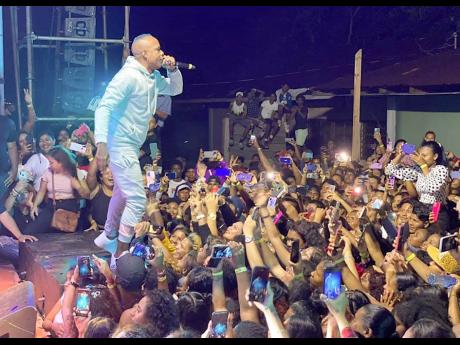 Dancehall entertainer and former member of RDX, Delomar, has opened up about the worries he had when he was preparing to make a solo appearance on a recent tour to Nicaragua.

Delomar, who returned to Jamaica last Wednesday, told THE STAR: "I never know what to expect and what the audience over there was expecting, either."

"Imagine, this is my debut solo tour, so I was worried to step out on stage in a place I had never performed before," he continued.

The artiste spent more than 12 years being one-half of the dancehall duo RDX and rose to popularity for tracks such as Everybody Dance, Bend Over and Shake Your Bam Bam.

Delomar had officially launched his solo career during the pandemic with the singles Dweet, Whole Night, and Affi Mek slowly garnering views on YouTube.

He said that Nicaragua does not have a dance or dancehall culture, which also added to his anxiety. The two-week Breeze Tour (Nicaragua leg) saw Delomar travelling and performing to packed, sold-out concert venues across six cities, namely, Bluefields, Bilwi, Leon City, Managua, San Juan Del Sur and Jiquilillo City.

"Of course, when the promoter linked me about collaborating on a tour, I knew it would have to be structured in a way that people would see that I had embarked on a journey, recording on my own. I also discovered that our songs, specifically Shake Your Bam Bam, is number one in Nicaragua," he said. "I was extremely honoured to perform the songs from the RDX portfolio, and even more honoured that the audience connected to my new singles, Twerk and Breeze."

While in Nicaragua, Delomar, who was accompanied by disc jockey ZJ Rush and dancer Energy Kidd, recorded the video for an upcoming single titled Sidung. Careful in making connections, he said: "I have not focused on speaking with artistes about future or potential collaborations, because I would love if my brand is properly established in the country before I jump into that."

"There are very few dancehall entertainers, and dancehall culture is not so popular; meaning, few dancehall acts from the country, and it is a mixture of reggaeton. So for now, I am growing my catalogue, getting used to performing solo, and making persons familiar with the talent I have," Delomar continued.