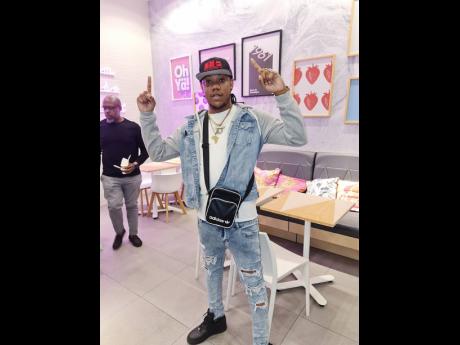 "The juvenile know music," is a comment that Stone Love selector Gugumental has been hearing more frequently, and he admits that it pleases him.

Stone Love owner Winston 'Wee Pow' Powell says the youngest member of the crew "is the man who bridges the gap between the older Stone Love fans and the youth". He hailed the selector as one of the hardest working members of the crew.

"It is easy to play music to entertain my generation, but this is an international sound and we play for all kinds of people. So, in order to play my best game, I study the foundation of the music so that I can appeal to everybody," Gugumental explained.

He added, "I go back and listen to the veterans and sometimes when I'm in the dance and I draw a tune from way back, I will tell who sing it, what group the person used to be in and the year the song was released. Music is feelings and I can hear a song for the first time and know it was a big song, and so I will go ask Wee Pow 'bout it. And him will seh, 'Wha! Big tune dat!' and give me the history of the song."

Gugumental, who met Powell in 2011 and has been around the sound ever since, has been playing with the sound officially for seven years. He is proud of moving up the ranks to the point where show promoters are asking specifically for him.

"Gugumental have vibes. People are requesting Gugumental for shows. Right now, that is on the international side - places like the US, UK, Cayman Islands where the place is open. And I have to give thanks to be able to go out there and earn even during this pandemic," he said.

Gugumental strictly follows the watchwords that Stone Love plays by - professionalism and clean lyrics. "Stone Love is a principled sound, we don't curse bad words and we don't play dirty or derogatory music. But the thing is that the vibe is so fulfilling that the patrons don't even realise that we not playing certain songs. That's why a Stone Love tape can play anywhere, even inna church," the confident Gugumental boasted.

Exceedingly loyal to the sound on which he cut his selecting teeth, Gugumental's enthusiasm is palpable when extolling the virtues of Stone Love. "We have the best system anywhere, others come close, but that mellowness that Stone Love has nobody else don't have it. We never drop our standard. Wee Pow is smart and he always tell us, 'Whether big crowd or small crowd, don't drop the standard.' From the sound string up 'til when the dance dun, yuh get yuh money's worth," he declared.