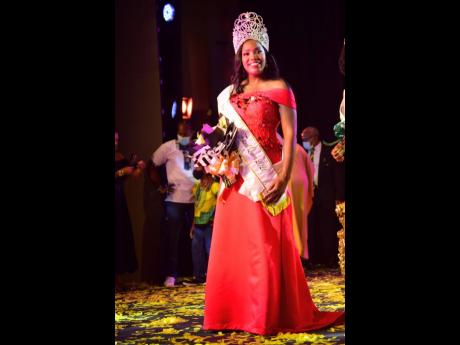 Festival Queen for 2021 Dominique Reid is basking in the glory of her recent win as she takes the crown home to Manchester for the parish's sixth hold on the title.

And she is as proud as a peacock that her parish also claims the world's fastest woman, Elaine Thompson Herah, who has recorded a historic 'double-double' at the Olympics, defending her 100m and 200m titles.

"It is a good year for Manchester. We haven't won the Festival Queen title in a long time, but still, we are second behind Kingston and St Andrew with most wins. I am happy to be the one carrying it home this year. And also I am so proud of Elaine...Manchester all the way!" she said excitedly.

Reid's win last Sunday was also historic, as it represents the first time that the daughter of a former Festival Queen won. In 1991, her mother, Karlene Kelly-Reid, won Miss Manchester and then the Festival Queen titles.

"My mother is ecstatic! At first, when I said that I was entering, she didn't believe me. Then when she realised that I was serious, she was the driving force behind it. I really didn't have any expectations of winning, but I am happy. When I heard my name, I was shocked and wondered if they were really calling me. I hope the camera didn't catch my expression. It was so surreal. I went to bed, slept and woke up, and it is not a dream, it is real," shared Reid, who also received sectional prizes for Most Active in her Community, Best Use of Social Media, Most Culturally Aware Queen and Best Performance for the Evening.

Having a mother who was a queen and who also continuously supported the competition, paved the way for Reid's eventual involvement. "As a little girl, I would always go to the shows, and loved to see the pretty dresses that the queens wore and all the glamour of the event. But then, afterwards, I realised that this was much more than just a beauty pageant, it was about nation-building and preserving your culture and I really like that," the Hampton past student told THE STAR.

For her, the best part of the competition was getting to know the other parish finalists, who she now considers family, and she is anticipating working alongside them as she sets out on her special project associated with her year-long reign.

"It was wonderful to meet the other 12 queens, my sisters from different backgrounds. We bonded during the competition, and I even cried today when I was packing up to leave Christar Villas, where we all stayed. But we are going to keep in touch, especially since my project focuses on dental care and oral hygiene for children three to 12; and I want to do it islandwide, through the schools, so I will have to reach out to them for assistance," Reid stated.

A dental surgeon and graduate of The University of the West Indies, St Augustine campus, Reid plans to use a portion her $500,000 prize money to buy some of the tooth brushes and toothpaste she will need for her project, which already has support from the Rotaract Club of Mandeville.