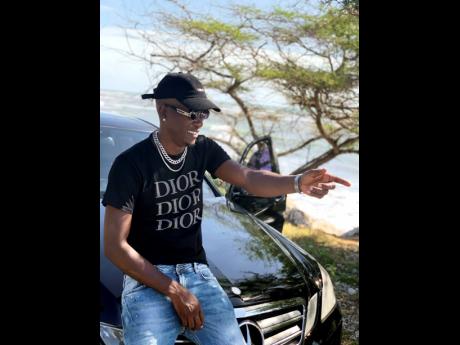 Entertainer Okeefe Aarons, more popularly known as Laden, was arrested and charged by the Black River police in St Elizabeth with illegal possession of firearm and ammunition.

He was taken into custody on Wednesday night, along with another man who has been identified as 21-year-old Saaion Ebanks, a farmer of Nembhard district in St Elizabeth, and a 16-year-old boy.

Reports by the Black River police are that shortly after 10:30 p.m., a police patrol intercepted a black Mercedes Benz in which the entertainer and the other accused were travelling, along Cheapside main road, in Cheapside district in the parish.

The driver was ordered to stop and he complied, but the vehicle sped away after several seconds.

The lawmen gave chase and observed an object being thrown out through the vehicle's sunroof. The police managed to intercept and stop the vehicle. The vehicle and the accused were searched.

They were taken back to the area where the object was thrown, and a search of the area led to the discovery of a Hi-Point 9mm semi-automatic pistol, fitted with a magazine containing one live 9mm round. The accused were later questioned and charged.

Aarons, who used the name 'Jim Laden' up to 2006 when he entered the Digicel Rising Stars competition, later joined up with Big Ship Records, where he recorded his first single Gal Coward. He has since recorded well-known singles including Time To Shine, I'm Sorry and Gal Professional.