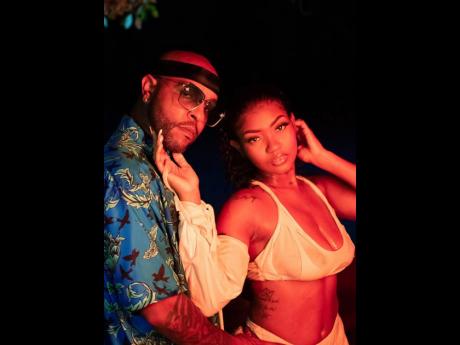 In August, Jada Kingdom gave fans a peek into her love life as she publicly declared that she was in a relationship with Grammy nominated singer/songwriter, Verse Simmonds.

The pair have been showing that romance is not the only area in which they are compatible. They released their first collaboration, Bedroom Bully, in September, and today, they will be dropping the official visuals to the steamy love track.

Kingdom told THE WEEKEND STAR that the overall reaction to their relationship has been positive.

"My fans actually love him. Of course there's some that just hate that I'm with anyone but even they seem to like him as well. I think they see how happy I am and they are happy that I'm happy. With that said, so far everyone is loving the song to the point that I and Verse have been getting threats from fans to drop the official video," she laughed. "It's always a vibe when we work together. Verse is very easy to work with and he made it easy for me especially because the song was already dope."

A teaser for the video was posted to Simmonds' Instagram page which shows the pair playfully caressing each other in between the sheets as he deejays. Simmonds said Bedroom Bully will act as the 'official introduction' of them as a couple.

" Bedroom Bully isn't really a new concept, it's a common term in the islands, but it just made sense when it came to Jada and I on our first record together," said Simmonds, who has written songs for the likes of Beyonce, Chris Brown, Nicki Minaj and Justin Bieber. He said that he considers himself lucky to be Kingdom's beau but not because she's desired by many.

"It's more so because we suit each other in so many ways aside from music. What makes her special to me has less to do with what people can see when they look at her and more to do with her mental and how she cares for me," he said. "It's one of those hard to explain type of bonds where you meet someone and you feel like you've known them all along. Then one day you look up and realise you've spent every day together in some way for the past year and a half." But he stressed that when it's time to get down to music, they take things very seriously.

"Yes, some moments can be playful and flirty but when we are working we are focused on the job," he said.