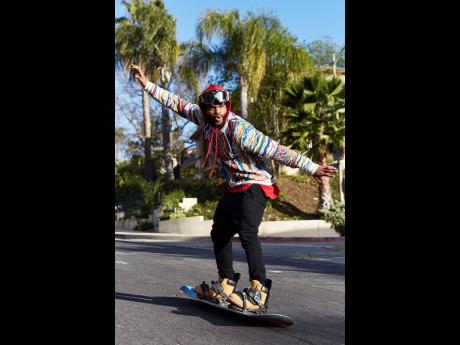 Always one to innovate and find new outlets for his comedy, award-winning actor/producer Andrew 'King Bach' Bachelor has explored the realm of music and is finally prepared to serve up his visual comedy-music album, 'Medicine', which he has been working on for a couple of years. It is scheduled for release next Friday, August 30.

In a recent interview with T he STAR, King Bach said, "Since music is so universal, the objective was to create something that music listeners have never experienced, and trust me, people, in general, haven't experienced anything like this."

The album is co-produced by American record producer and songwriter Poo Bear, who, having worked with entertainers like Justin Bieber, Usher, and Chris Brown, understood King Bach's creative direction.

"I was introduced to Poo Bear through a mutual friend, and immediately we vibed together creatively and organically, so it transformed, into working together to create an entire album," he said.

The name 'King Bach' should not be unfamiliar to followers of social-media and video platforms like Vine, YouTube and Instagram. Is the moniker that the Los Angeles-based personality chose years ago.

"Everyone always called me 'Bach' while I was playing sports. One day, for a school history project, I took the assignment very seriously and dressed up as a king. My teacher made a joke and called me 'King Bach', and it just stuck from there," he said.

With influential big-screen comedians such as Will Smith, Jim Carrey and Eddie Murphy on the list of persons he looks up to, King Bach said that he hopes to surpass their acheivements and become the biggest movie star of all time by taking baby steps, the album being one of those.

One of the videos, titled Vegan, which was shot in Jamaica last June, chronicles the struggles of persons who diet or that, follow various food lifestyles.

"You try to eat healthy, but there is always temptation of the unhealthy foods that you love so much. I am a pescatarian, but there are some days when I dream about having a piece of jerk chicken. I don't actually want to eat it, but the thought crosses my mind," he said.

Paying homage to the rich heritage of his Jamaica-born parents, mother Ingrid Mourice, who was raised in Benbow, St Catherine, and father Byron Bachelor, originally from Trench Town, King Bach decided to include pieces of the island in the production.

"I wanted the album, in some ways, to be a reflection of me. So in creating the project, I had to make a reggae song, which turned out to be Vegan, and it would be disrespectful to film it anywhere else but Jamaica," he said.

"When people think of reggae music, they automatically think of the beautiful island and its culture. There are so many great spots, such as as Port Royal in Kingston and Rose Hall in St James, that I explore in the video that compare to nowhere else in the world."

He said that the video production gave him a chance to highlight and showcase his roots and some of his favourite places to visit on the island.

Speaking of the production, he said, "I think Vegan was one of the challenging videos of the complete project because we had never actually made a video in Jamaica before now. I was either directing or co-directing while being the main act. My sister, Christina, was responsible for producing all the videos featured on the visual album."