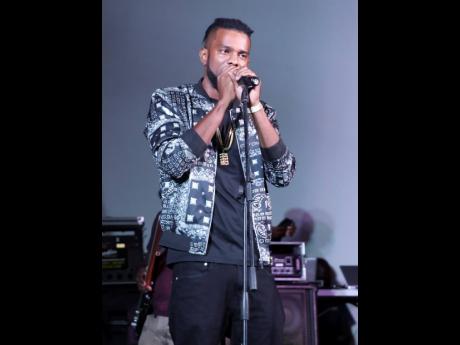 Once the fear of performing in front of an audience, small or large, is defeated, then the need to always have an audience takes over.

Reggae/dancehall entertainer Esco Da Shocker believes there are some entertainers who must have a large audience.

"Some entertainers don't like doing the small shows, but it is not only because there's a need for large audience to boost them, but also as a result of the back-end deal with promoters," Esco Da Shocker told THE STAR. "As an entertainer, it is normal to want your big money. But I have always relished all kinds of shows - maybe it comes from being a selector. Every show has its own joy and benefit to me."

The recording artiste, formerly part of the duo Leftside and Esco, caught up with THE STAR after a performance at Jamaica Live, at The Serengeti, Hope Zoo, last Saturday.

This was the artiste's fifth time doing a show dominated by reggae artistes.

"A small audience allows you to relate, that's one thing I liked about Jamaica Live; I feel like the intimacy of the show gives you a chance to interact more. The entertainer can get into their truer sides and share a little bit more of themselves, things you don't see on a big platform where everything is rushed," Esco Da Shocker said.

NOT ALWAYS ABOUT MONEY

But he said 'small platforms' are "not conducive with making money all year-round", before adding that it is not always about the money.

"We can't say it does not make money as the music business cycles a lot, but every artiste should relish the small opportunities to go deeper and get intimate with fans; if you could take every fan into a studio one by one you would win them over," he said.

Esco Da Shocker revealed that doing small-scale bookings has worked to his advantage "to observe how audiences receive reggae music not only from other artistes, but from me, to know the right way of approaching persons with my upcoming reggae album."

He continued: "I got feedback from the audience over the weekend and people were able to see the track I am on ... to spread the positive message of reggae."

He performed unreleased singles Sailing, Ultimate and Pass the Kush, all scheduled for the album.