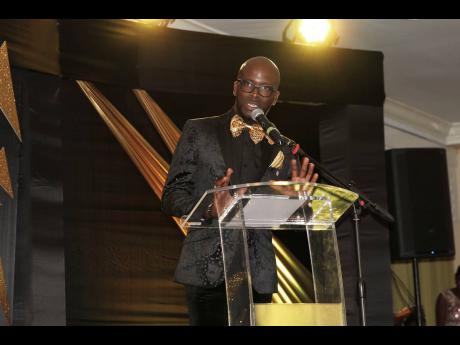 Radio broadcaster and Gosplash organiser Markland 'Action' Edwards says he has a genuine problem with gospel acts who don't want to be recognised as gospel artistes but simply as recording artistes.

Edwards, who has never been one to shy away from speaking what comes to his mind, did just that at the Sterling Gospel Music Awards (SGMA) last Saturday.

According to Edwards, who was the MC for the event, the word 'gospel' does not necessarily have to do with the genre but with the actual message that the music delivers to the public. That is where the confusion lies, he said.

Following the SGMA at the Knutsford Court Hotel in New Kingston, the MC said: "Sometimes when the gospel artistes speak, they end up confusing themselves more than they confuse the people because they are not thinking ahead. I think what most are trying to say is that they are more than just gospel artistes because of their ability to dabble in reggae, hip hop, or any other genre. But it does not matter because it is still categorised as gospel because it is about spreading the spiritual message."

He noted that there are several internationally renowned artistes, such as Kirk Franklin, CeCe Winans, Donnie McClurkin, and Shirley Caesar, who cannot be seen as secular artistes but as gospel artistes and ministers because of their work.

"I think it's mostly the Jamaican artistes that are trying not to be boxed in for fear of not entering other markets. But the best way to approach it is to say: 'Don't box me in as it relates to genre, but my theme, focus, and message is that of the gospel of Jesus Christ'," he said.

"If a person is confident about his or her craft and talent, then there is no reason to worry about being labelled as any one type of artiste ... . Once the artiste is good, they will eventually break ground."

In warning gospel acts about how they use social media, Edwards advised entertainers to form proper management teams that can effectively market their image, music, and various talents so that they can focus on recording music and on their ministry.

"A lot of gospel artistes will go on social media, and they will post things that oftentimes take away from their actual ministry, and they end up doing other things than what they say they are all about," he said.

"As we continue into 2019, some of the artistes need to refocus and spend some time on themselves where the music and the delivery is concerned, and even their public utterances, because you find that they speak on issues they are not well informed on, which results in them sending the wrong message and ruffling other feathers. Just stay focused, and get professionals that can help in terms of management."