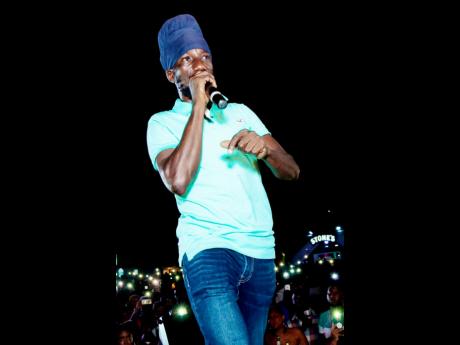 Sizzla Kalonji is probably one of the few local reggae/dancehall recording artistes to have close to 100 albums in his catalogue, and he has no plans to cease production any time soon.

With the new album, Victorious, that is slated for release on March 18, Sizzla wants it to have a global impact.

In a recent interview with THE STAR, he said: "It is very important for me to continue producing music because music is life, music is love and music is my passion. I have used the music to reach out to a lot of people in the world, and it is the best thing spiritually to reach out to the people more, and it is part of our life and tradition. I don't think I can stop. It is the best part of me."

The Solid As A Rock entertainer does not believe that his music can be watered down.

Instead he said: "It is one of the defining reasons why I am current. So when the 'Most High' bless you with a new day, I think you should make the best of it and don't waste time. I don't like having any gaps in between me, my work and the people. You might not hear me with one dozen number one songs, but I am always putting out new music with a message. So, for the sake of being current, I will continue to make songs non-stop. The more music the merrier."

The 16-track album is a collaboration between producer Richard 'Breadback' Bramwell and Kalonji Music and does not feature the vocals of any other recording artiste, neither locally or internationally-based.

When asked if he had any upcoming projects with DJ Khaled, having been frequently featured on each other's social media pages during the American record executive's last visit, Sizzla said: "There are going to be more songs and more albums with collaborations, but my producer and I have been working on this one for quite some time."

He continued: "Comparing previous albums, it is way different because we are producing the music and making the beats for ourselves, and we are more experienced showing the evolution of life."

And while he would like the album to do well, Sizzla said that he simply wants more persons to hear his music.

"It has nothing to do with working for an award, but more about the people. If it produces a Grammy for us, no doubt it will be appreciated," he told THE STAR.

"I am always making songs to liberate nations, and I want victory in everything that I am doing. That is where the title comes from; giving the people conviction and confidence in self to know they can win and get victory. I also expect this album to pull more reggae music fans towards the table of Rastafari."

The album was placed for pre-order on March 11, and, according to Sizzla producer, Breadback, it is receiving good feedback. The album will only be available on digital platforms for now, as there are no plans to publish hard copies.